Showing posts from January, 2019
Show all

When Darin is away...

- January 15, 2019
It’s Tuesday morning. Darin is in Burundi; his first work trip of the year. Since Darin started traveling out of the country, we have discovered that Darin being away from home = something not so fun for Jonna and the kids to deal with. We have been without water, had lightning strike and destroy our Wi-Fi, and been stuck at home because of riots in the community. Last night a storm came through and knocked out our power. This is not unusual and was not cause for much stress as the kids were both asleep and I had a little charger to run my fan. Then both kids woke up and said they were being eaten by mosquitoes and were too hot to sleep without fans. I set to work hooking up extension cords and fans to our solar generator; problem solved. Only the fans didn’t turn on. I basically told the kids to deal with it as it was very late, very dark and I was very crabby. For the rest of the night, often as I was about to drift off to sleep, one or both children would come into my room to
Post a Comment
Read more 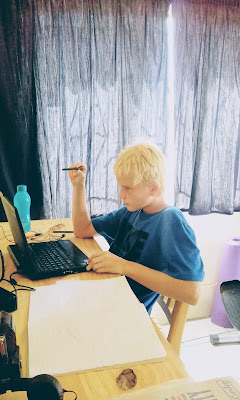 Earlier this week, I told Tyson and Jori that we would be starting school on January 9. This morning, after listening to them complain that there was nothing to do, I moved up the start date to today. We are using a program called Easy Peasy All-in-One Homeschool and Easy Peasy All-in-One High School . Both kids are taking the same classes, some at the 8th Grade level and some at the 9th Grade level. I am hoping this is going to work out and that they will motivate each other to work hard and do their best. I do have a bit of worry that my overachieving daughter will end up leaving her brother in the dust in a very vocal and not so nice way, but will be praying that does not happen. We are definitely going to go through a bit of trial and error as we figure out which courses are just fine as written and which courses need to be supplemented. Tomorrow will be our first day of US History, which out to be interesting as Jori doesn't have any prior schooling in this area and Ty
Post a Comment
Read more
More posts