Showing posts from July, 2017
Show all

Friends along the way 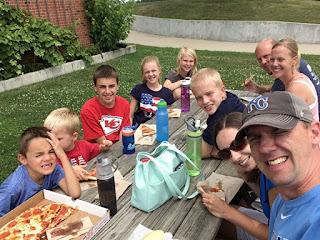 Between our time in Michigan and Minnesota, we stopped to visit two families with connections to South Africa. Our first stop was just outside of Iowa City, Iowa, a midpoint we had chosen as a meeting place with our friends, the Van Gilders. We met Tim and Athena soon after we moved to South Africa in 2011. Their family had arrived the week before ours, and with children of similar ages, a son 1 day younger than Tyson, a daughter 6 months younger than Jori and baby Zeke, we quickly became friends. It was a blessing to experience life in South Africa with another family from the states. We often had sleepover swaps with the kids, date nights with the adults and lots of Sunday afternoons spent together. The Van Gilders were also a huge blessing to our family when we moved to Tshepo ya Bana, often bringing special treats for the whole gang there, including Thanksgiving dinner! We only had a few days with our friends, but it was great to catch up. As soon as they arrived, the kids
Post a Comment
Read more

See you next time, West Michigan

- July 02, 2017
Well, we wrapped up our final morning in Hudsonville earlier today and are now just outside of Iowa City, Iowa, waiting to see the Van Gilder family! West Michigan, you were so good to us. Our time in the US has been so much more relaxing and restful and right this time around. I am not sure if we are just more settled into our South African life, if we planned the timing better (like arriving on a Thursday and having time to rest instead of Saturday night and heading out the door for a full Sunday like we did 3 years ago), or if we had our expectations in a better place, but for whatever reasons, this trip has been going a lot smoother. And you all know that when I say "we" I really mean "me" because Darin and the kids are just more even keeled than I am. I will be posting pictures later, but I have been putting a bunch on Facebook and Instagram when I've had a few odd moments to do so. Our time was PACKED, but also so relaxed. I think it felt packed becaus
Post a Comment
Read more
More posts